A room with a view


About a month and a half before I came to Belgrade (around May), I started searching for a place to for me to live in once I arrived here. After a week searching through the web - and not being very successful, to be honest - I decided to call for a little help from my friends: I sent several emails and messages to most everyone I knew here in Belgrade, asking for some assistance with my search. Among the many replies I got (everybody was SO kind and helpful!) Ana - a Brazilian girl living here in Belgrade - suggested I should contact this real state company called Symbol Properties, since several people she knew were very successful in finding flats with their assistance.

I got in touch with Symbol Properties over email and they were extremely helpful and very professional, sending me a handful of interesting flat offers along a couple of weeks, all of them fitting my search criteria perfectly, as well as my limited budget. As the time of my arrival to Serbia approached, I decided for the 3 offers that I liked most: those would be the flats I was gonna visit as soon as I got Belgrade, in order to decide which one of them I'd take. All 3 apartments seemed to be great as for the pictures sent to me, but one of them really caught my eye. Don't know really why, but I kinda felt that that one was gonna be the_one I'd fall in love with once I visited it - and I was totally right! As soon as I stepped into it with the real state agent, I knew that was it! I didn't even had to sleep on it, I decided right away I'd take that one and, less than 24 hours later I was signing the contract and moving in.

Location-wise, it's perfect: in the very centre of the city, at this quiet square that rather reminds me of my neighborhood in Rio, "Praça São Salvador"... At night, specially at Fridays and Saturdays, the square gets packed with youngsters, drinking beer, talking loud and even playing some music. There are 24 hours markets and bakeries within 100 m from my building, not to mention my favourite baklavdžinica ever, "Dukat" and even a newly opened Israeli fast food place with really great falafel sandwiches! The main square and pedestrian zone of the city are within a 2 minutes walk from my place as well. And if I feel like clubbing, a slow 20 minutes walk will take me to some of the coolest "splavs" in the city.

But all those qualities will never measure up with the most precious quality of all of this apartment: I got a room with a view. And what a view <3 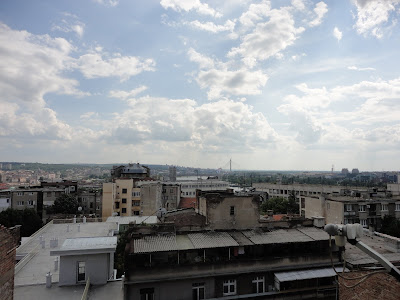 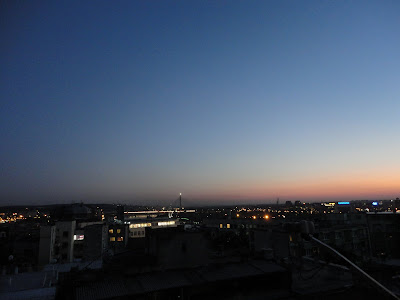 By Maria at 00:05 5 comments:
Email ThisBlogThis!Share to TwitterShare to FacebookShare to Pinterest

I`ve been away for quite some time, I know... Awfully busy with last minute details of my return to Serbia, taking place on July 4th!!!
This time around I`ll be in Serbia for 7 months in a row (!!!), studying Serbian language and getting to know a bit better the country and its neighbors. I`m SO looking forward to this long trip, counting the seconds to be there again from summer to winter.

All in all I just meant to say that in a couple of weeks time I`ll be back here, posting as much as I possibly can and updating you all with my lateste experiences and adventures in the Balkans :)

Stay tuned, more info about my travel plans and route in the forthcoming days!
By Maria at 03:52 2 comments:
Email ThisBlogThis!Share to TwitterShare to FacebookShare to Pinterest

What a Kafana is?

I was just about to post my 3rd entry for the "Minha Belgrado" series, pointing out some of my favourite "kafanas" in Belgrade. But then I realised that most people who had never been to Serbia before probably have no idea what so ever of what a kafana is. So I thought it would be cool to write a bit about it.

Some would simply describe kafana as the serbian equivalent of a tavern. But others - and I include myself into this group - would tell you that kafana is much more than just a tavern: it's almost a way of life!

The word "kafana" comes from the turkish word kahvehane, meaning something like "coffee place" or "coffee house". The first kafana in Belgrade was opened in 1522 in the neighbourhood of Dorćol, run by Turks - those were the early days of centuries of Ottoman occupation in the Balkans.
Although the "kafana concept" arrived in Belgrade in the 16th century, it was only in the 1700's - by the time of the second Ottoman occupation - that the term "kafana" started being used to refer to those coffee inns.

Alcohol only started being served in "kafanas" on the first decades of the 19th century. By that time, "kafanas" were increasing more and more in popularity, taking an important and special place in the development of social, economic and cultural life of Belgrade. It was the place where the known and the unknown people sat for a drink, as well as famous and anonymous writers, poets, journalists, actors and various artists, politicians and so on. It was a shelter for bohemians, travellers, students, people with no place to stay, prostitutes… Each kafana had their own physiognomy, character and guest circle.

Despite de taxes that Prince Miloš started imposing on kafana owners in the early 1800's (and the working licenses that were now required to run such places), by the end of the 19th century Belgrade was crowded with them: according to some statistics, by the turn of the 20th century Belgrade had 1 kafana/coffee inn for every 50 inhabitants!
By then, the number of "kafanas" in Belgrade was in fact so big that the owners of those places started looking for a different "something" to attract more customers - that was when live folk music acts were introduced in "kafanas". 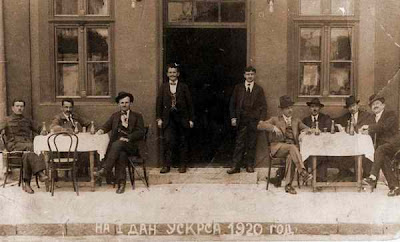 Prior and between the two world wars, "kafanas" were the place where important events took place or decisions were brought and even members of political parties had their own, favourite kafana where they would go to on a regular basis.

Nowadays, "kafanas" continue to be a place for meeting friends, drinking, talking & discussing, live music, singing your favourite tunes out loud after tones of kilo kilo and so on. It's the place where a foreigner can best understand and experience Serbs and their social personalities. 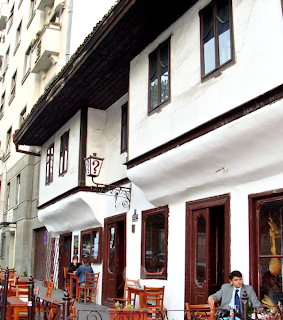 Kafana "?" ("Znak Pitanja", or "Question Mark", in English), one of the oldest in Belgrade
On my next post, info and directions to my favourite "kafanas" in Belgrade ;)


Source:
http://www.jat.com/active/en/home/main_menu/travel_info/jat_review/januar_2006/inns.html
Interesting reading: Kafana rules:
http://srxx.blogspot.com/2005/11/kafana-republic.html
By Maria at 22:33 No comments:
Email ThisBlogThis!Share to TwitterShare to FacebookShare to Pinterest

Here in Rio (and all around Brazil, I guess), people say that the year only really starts once carnival is over - and even though I hate to admit it's true, my posting absence here in my blog won't let me lie!

Anyways, I'm 100% back now, with tones of new projects and things to tell.
And just so you know, I've been away from blogging about Serbia and the Balkans for a couple of months, yes, but during this time I worked hard to keep the Balkans as close as possible to me.
Ladies and gents, I present you the Balkan Carnival Evening promoted by me and my work-partner, Sol Provvidente, with a band also produced by the two of us: the Go East Orkestar":

Enjoy, and till soon! ;)
By Maria at 19:35 No comments:
Email ThisBlogThis!Share to TwitterShare to FacebookShare to Pinterest

For those of you either curious or nostalgic about Belgrade, here are 4 live street cams placed on different locations of the "White City" - and 3 of them you can even control up and down, left and right and zoom in and out. Check out!

http://camera.beograd.com/
This camera is placed on Terazije, facing towards hotel Moskva. this one is "fixed", you can't control it. I believe that in a clear day you can even spot Hram Svetog Save at the far background :)

http://www.informatika.com/webkamera/trg-nikole-pasica.htm
Trg Nikole Pašića: if you move this cam to the right you'll see the ice skating rink, which is always illuminated by colorful lights at night :) 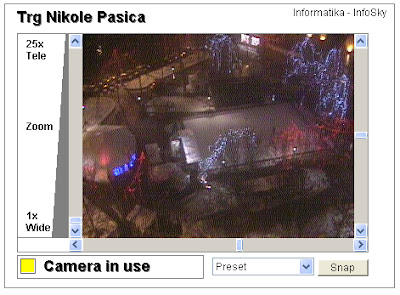 http://www.informatika.com/webkamera/novi-beograd.htm
Novi Beograd: this cam shows a beautiful view of the new part of the city, specially at night, when the buildings are all lit up

http://www.informatika.com/webkamera/ada-ciganlija.htm
Ada Ciganlija: this cam is cooler during daytime and specially during summer, when the river island and its beaches are crowded with people.

Just passing by quickly to wish you all a happy New Year!
May 2011 be a year with more arrivals, less departures and no farewells :)

By Maria at 00:29 No comments:
Email ThisBlogThis!Share to TwitterShare to FacebookShare to Pinterest