Off to the coast

The cool news?
Saturday we will be heading to Montenegro: Go East collective will be performing @ EKO Fest, in Herceg Novi!!!

Can't wait :)
By Maria at 21:21 No comments:
Email ThisBlogThis!Share to TwitterShare to FacebookShare to Pinterest

A day in Zagreb

I was at the supermarket with my friends when I got this message from Neven saying that when earlier that day he invited us to go to Zagreb with him, he meant it. "Are you guys coming?", he asked.

It was 9 pm and Neven said he and his friend planned to leave around midnight. We would get to Zagreb on the next day`s morning, stay there until late afternoon/early evening and then back to Belgrade. A 4 hour journey from Belgrade until Croatia`s capital.
I really felt like going - I mean, it`s not everyday that you get to be invited to spend a day in Croatia! I asked my friends if any of them would like come with us that evening, but as Marina and Ju had just arrived from Rio that very same day, they wanted to rest a little, eat something relax.

It was half past midnight when I met Neven and his friend Njego at buregdzinica Sarajevo and we got on our way to Zagreb. After one hour in the car, a heavy thunder storm reached our car and stayed with us for a couple of ours. A little while after we passed the Serbian border Njego - who was driving - stopped at a gas station, where we got a few hours of sleep.

When we woke up it was around 7 and the day was on - still a bit cloudy after the heavy rain on the previous night, but looking like it was gonna be a bright summer day within a couple of hours. On the road, Njego showed me some houses/constructions by the side of the road, destroyed during the war. Is still weird to think everything happened almost yesterday. I mean, 15 years might feel like a life-time to me, someone who`s turning 26 now. But 15 years is nothing, really...

After one more hour and something driving, we finally arrived to Zagreb! Njego dropped me and Neven nearby the city center and took his way - later that day we would meet up with him again and to go back to Belgrade.
Neven and I had a quick - but really good! - sandwich for breakfast and then we went for a walk around the old city. We visited the Cathedral, passed by an open air market and then we stopped for a tea with krempita on a really nice cafe called Mala Kavana, on Trg Bana Jelačića (Ban Jelačić Square), Zagreb`s main square. Really beautiful place.

After that we split ways: we agreed on meeting around 5 at the square`s statue: that would give me around 4 hours to do whatever I wanted in Zagreb and to explore the city as I wanted.

Don`t know if I mentioned here before, but I love wandering alone in a city I`ve never been before. Wandering with friends is great too, but when you`re alone you take your time, you pay more attention to certain details you probably wouldn`t if you had your friends around.
So, with a map and a couple of brochures I got at the city`s tourist council I had everything I needed to start exploring the old city of Zagreb!

I took a couple of walking tours one of the brochures suggested, and it was totally worth it: lots of cute little streets decorated with flowers, beautiful 17th, 18th and 19th century buildings, churches, gardens, lanes and so on. It felt like I was in some movie set and at some moments it felt a little bit like some spots I`ve been to in Vienna as well.

After those 2 walking tours I visited two museums: the Zagreb City Museum and the Art Naif Museum - both really nice and worth a visit.
After that I stopped by a shopping center, sat a on a café for a cold soda and then headed back to Ban Jelačić Square, ponctually at 5pm.

The 3 of us met up again, had another cold drink. The cloudy, gloomy morning had turned into a bright, warm summer afternoon and the colours on the square were so bright it kinda felt like I was inside a painting.

We were now ready for another 4 hours on the road until home. Until my Belgrade.
By Maria at 09:50 2 comments:
Email ThisBlogThis!Share to TwitterShare to FacebookShare to Pinterest

Ju and Marina - another two friends from Brazil - arrived here in Belgrade a couple of days ago.

Sol and Chica went to pick them up at the airport but Ju and Marina showed up at the gate with a 1 hour delay: they were bringing mandioca flour from Brazil (to make a traditional brazilian side dish, called "farofa") and the airport police thought it was cocaine and held them for almost 1 hour, hahaha. They soon realised it was really flour and allowed them to go.

As soon as the girls finally arrived to our apartment we took them for a typical Serbian lunch at Srpska Kafana: sopska & srpska salata, bread, grilled meat, stuffed paprika with cheese and so on. 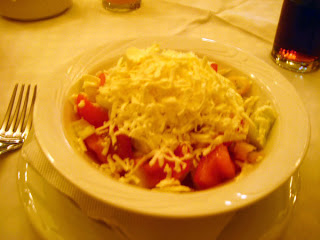 After lunch we took them for a walk throughout the city center: Trg Republike, Knez Mihailova and, of course, Kalemegdan. 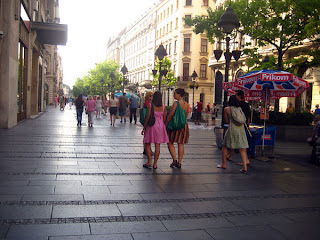 Once in Kalemegdan we met up with Neven who, coincidently, was passing by the fortress too. Once we were all together, we decided to go for a drink at this place called Cinema*, where we watched the susnset and had some nice talking before coming back to our apartment. 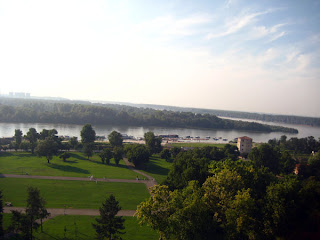 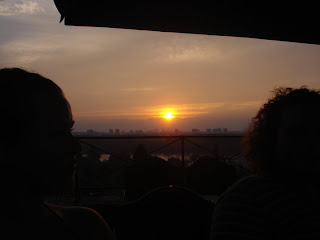 ------------------------------
*Cinema  is this really nice café-club placed in Kalemegdan, facing the Sava and Danube river. They have a nice variety of drinks (the drinks we tasted were delicious!), a nice, friendly staff and some great music concerts every now and then. I highly recommend you people to go there to have a drink while watching the sunset - it`s incredably beautiful!
By Maria at 23:04 No comments:
Email ThisBlogThis!Share to TwitterShare to FacebookShare to Pinterest

Although we had plans to spend the day in Ada Ciganlija (more on what`s "Ada Ciganlija" later), we ended up giving it up: we read on the newspaper that the Beotango Orchestra - a band that plays tango with a balkan flavour - was gonna play for free in Kalemegdan that night.

I just couldnt believe it, really. I`m a huuuge fan of folk dances in general, serbian dances more than anything.
We ran to the stage, took our seats and watched - for hours in a row - folk dance groups coming from Serbia, Belarus, Greece, Italy, Israel, Poland, Scotland, Costa Rica and so on.
I can`t put on words how special it was for me to be there, with my friends, watching all that. I will never forget it, for sure.

After the festival we went to Skadarlija, had some spritzer and then we went home.
Such a wonderful evening :))))))
By Maria at 20:35 1 comment:
Email ThisBlogThis!Share to TwitterShare to FacebookShare to Pinterest