I'm not much into sugary, you know... But I will never forget the day I first tried baklava: it was in Varna (Bulgaria) on a Christmas Eve with my brother Kosta and his family and honestly, that was one of the best sweets I ever had in my life!!
Once I was back to Rio de Janeiro I started searching for places that sold baklava. I did manage to find several places but sadly enough, none of them had a baklava half as delicious as those I had in Bulgaria.

For those of you who that doesn't know exactly baklava is: well, it's a delicious sweet of Turkish origin, made out of tens of layers of fine, sweet phyllo dough, with different kinds nuts in between its layers, sweetened by honey. It's "heavenly", like my friend Valja says :)

But anyways, back to my "perfect baklava" search, I finally discovered (thanks to my friend Saša!) the best place ever for baklava and other Turkish sweets in Belgrade: Baklavdžinica Dukat!
"Dukat" is a pretty new place in Belgrade (reason why I had never heard of it in my previous visits to the city): it was opened on May 20th this year, at Topličin Venac, number 3 (next to "Tanjug" building) 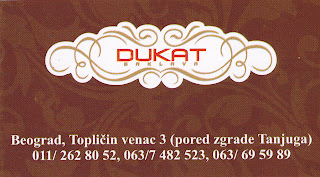 The mastermind behind "Dukat" is Mustafa Avdžija (originally from Gaziantep, Southeastern Turkey), whom came with his family to Novi Pazar (Southwestern Serbia) in 2004. A few years later, he and his friend Nedžad Ličina (from Sjenica, Southwestern Serbia) decided to start a partnership, opening their Baklavdžinica "Dukat" in Belgrade.
With over 15 different kinds of baklava and other Turkish candies/sweets, "Dukat" quickly became a "summer hit" in Belgrade, as described by newspaper 24 Sata:

- Our speciality is pistachio baklava. There are also pistachio "sarmice" , "kraljevska kriška", chocolate baklava, "saray sarma" and so on. People get surprised when they see such variety. Here [in Belgrade] they're used to eat baklava only with nuts, but most people don't know that the true baklava is made with pistachio. People often ask for the recipe. I just tell them that everyone has its special craft and that these candies and its recipes cannot be made by anyone, only by masters - Mustafa explains. (Taken from here)

I didn't try all the kinds of baklava and candies they offer at Dukat, but I did try the pistachio baklava and pistachio sarmice and really, I can't describe to you how delicious it was! Maybe you can figure by looking at these pictures of the shop's glass window: 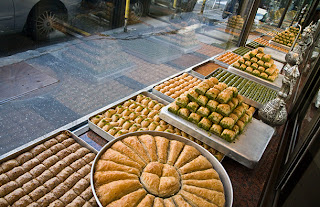 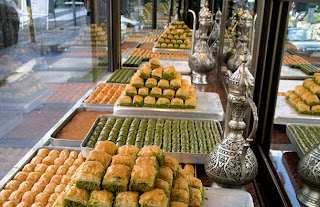 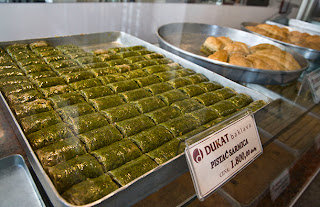 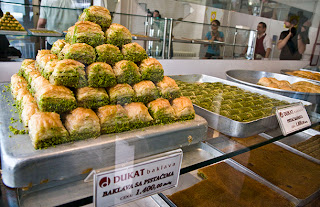 I couldn't find here the exact working hours of "Dukat" but as I remember it was opened until early evening, around 7pm maybe. Prices of those sweet delights vary from RSD 1400 to RSD 1800 per kg (from around €13 to €17).
A Belgrade "must", for sure!
By Maria at 15:24
Email ThisBlogThis!Share to TwitterShare to FacebookShare to Pinterest

To find Baklava out in another country is very difficult. I was living in Netherlands and I never found it out. Till I came back to my country, I could taste Baklava again.

WOW, all the baklava you have shared is very cool and after seeing this baklava my mouth started watering. Thank you, author, for sharing this amazing content. Moreover, if you want to baklava order from any online shop and when you'll taste this you will become amazed.